The Royal Malta Golf Club was founded in 1888 by Lieutenant-General Sir Henry D’Oyley Torrens KCB KCMG. A career soldier, Sir Henry was commissioned as 2nd Lieutenant in the 23rd Foot, Royal Welsh Fusiliers in 1849. His rise through the ranks was very rapid, reaching the rank of Colonel in 1864, Major General in 1869 and finally Lieutenant-General in 1884; when he was appointed to command British troops in South Africa. One of his first actions was to found the Cape Golf Club (the forerunner of Royal Cape). 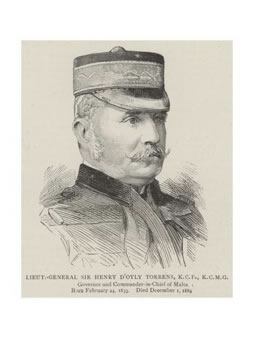 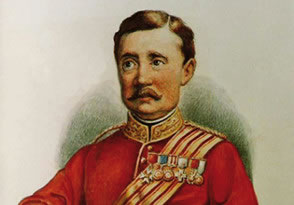 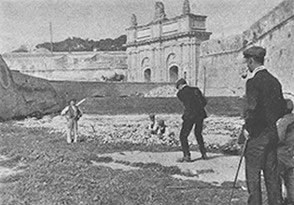 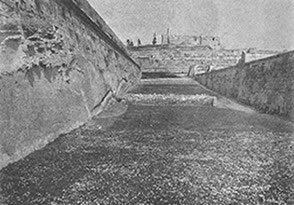 Sir Henry’s final posting was as Governor and Commander-in-Chief Malta. He arrived in Malta on the 28th September 1888 and within one month he had founded Royal Malta. At the time the then Duke of Edinburgh, Prince Alfred Ernest Albert, third son of Queen Victoria, was based in Malta as Commander of the Mediterranean Fleet and became one of the founder members of the club. Hence the royal patronage from where the club gets its name.

Sir Henry established a clubhouse in St Anne’s Ditch and a 9-hole course laid out around the bastions of the capital city Valletta. Not much of a golf course – with practically no turf and with ‘greens’ of puzzolana concrete, covered with sand to give the ball some stop. The so-called fairways were no more than 20 yards wide stone walls, in some cases 150 feet high, on both sides. The ball could either ricochet from one side to another or become lodged in the battlements. Early photographs exist as above.

The club moved to its present location in around 1904 which is essentially flat parkland on the silted up remains of the ancient harbour and river estuary (Marsa is the Phoenician word for harbour). Sites of historical interest include the old Turkish cemetery which lies across the road from the 9th tee and is a reminder of the Great Siege of Malta by Ottoman troops which was repulsed by the Knights of St John in 1565; and the 15th century chapel dedicated to Santa Maria ta’ Ceppuna which is next to the 10th Green.

With limited land available, which had to be shared with tennis players and cricketers, Lieutenant Colonel (later Major General) Richard Matthews Ruck was commissioned to design a course and club house. The course was completed but a horse-racing track crossed seven of the holes and the horses obviously had priority! The track was annexed to the golf course in the late 1980s and the course is now fully self-contained

The first known professional to be associated with the Malta course was F. Dalton, who was appointed in 1909, but the length of his stay is not known; it seems that none of the several appointees stayed for long. Our most renowned Pro was David Llewellyn who was here between 1978 and 1981. He was Henry Cotton’s ‘Rookie of the Year’ in 1971 and his greatest feat after leaving Malta was to win, with Ian Woosnam, the World title for Wales in 1987.
After one hundred years of existence the Club decided to upgrade the course with a major investment scheduled to take 4-5 years. The first part of the project started in early 1988 when the Club brought in consultants from the United Kingdom to re-do the 18 greens. This was a total success but, unfortunately, there was a six-month suspension of the project when 70% of the golf course was completely destroyed after heavy floods in late 1988, which also caused the abandonment of the festivities commemorating the Centenary of the Club.

Despite this huge setback, works started again in May 1989. The course has now been totally upgraded with the fairways planted with Bermuda grass, the installation of a computerised wall- to-wall watering system, the refurbishment of the sand bunkers (some 50 in total) as designed by David Llewellyn and the re-planting of the tees and greens. These improvements were coupled with a significant investment in course maintenance machinery, and the engagement of experienced green keeping staff.

The loss of much of the clubhouse (and many members’ clubs) as a result of a fire sparked off by a stray firework from the San Bastijan festivities on the evening of 18th July 2009 provided the incentive to build a modern clubhouse. This was officially inaugurated by Dr George Abela, President of Malta on 2nd June 2013.

All these improvements ensure that Royal Malta Golf Club offers a memorable golfing experience for members and visitors to this small island in the middle of the Mediterranean. This was demonstrated in June 2013 when the Club celebrated its 125th Anniversary. Some 140 visiting golfers and supporters from 35 Royal Golf Clubs from distant parts such as Australia, Canada, New Zealand and South Africa as well as from the UK enjoyed an extensive programme of golf and social events.